Ruth Bader Ginsburg Could Not Hold On Until Nov. Election 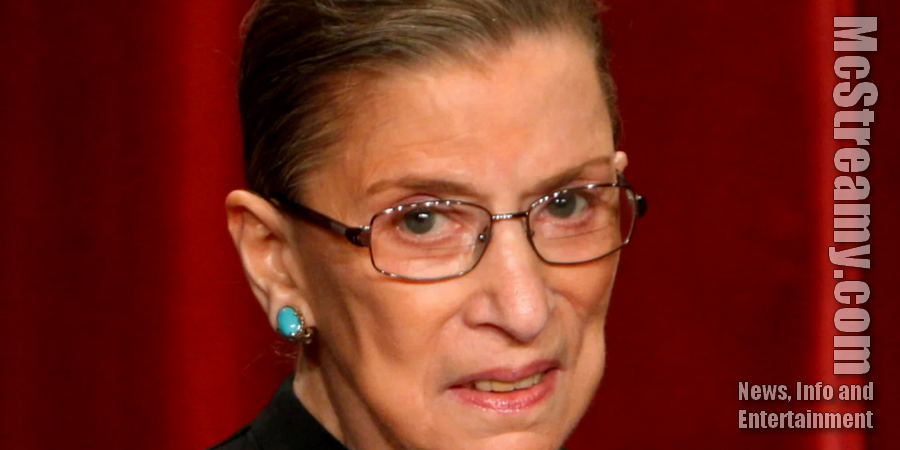 McSTREAMY.COM NEWS – The United States Supreme Court’s Ruth Bader Ginsburg (above) passed away Friday, September 18, 2020, at the age of 87 following a stellar law career which led to being nominated and placed on the court in 1993. Ruth Bader Ginsburg was the second woman to be sworn into the Supreme Court and served as a highly esteemed champion of the law on the nine-person bench of the highest court in the land. Many regarded her as a legal, cultural, and feminist icon. During the last years of her working life, she suffered from several bouts of Cancer but insisted on enthusiastically continuing to perform her duties hearing cases and reading legal briefs of the cases brought before the court.

In a statement dictated to her granddaughter, Ginsburg said, “My most fervent wish is that I will not be replaced until a new president is installed.” Generally, the court has been thought to have had a 5 to 4 mix of conservative thought versus liberal attitudes during recent years. This opening will likely cause a brawl of sorts because Republicans will probably hold on for dear life to their perceived right to replace Ginsburg with someone who they believe will use Conservative thought when a case comes before the court. Democrats, on the other hand, will with all probability want to replace Ginsburg with someone who might make decisions in the same vein as Ginsburg.

Former President Barack Obama has called on the Senate not to fill the Supreme Court vacancy created by the death of Ruth Bader Ginsburg, urging Republicans to live up to the standard they set in 2016 by refusing to give a hearing to Merrick Garland. “Four and a half years ago, when Republicans refused to hold a hearing or an up-or-down vote on Merrick Garland, they invented the principle that the Senate shouldn’t fill an open seat on the Supreme Court before a new president was sworn in,” Obama said.

Obama explained, “A basic principle of the law, and of everyday fairness, is that we apply rules with consistency, and not based on what’s convenient or advantageous in the moment.” Former U.S. President Obama said, “The rule of law, the legitimacy of our courts, the fundamental workings of our democracy all depend on that basic principle. As votes are already being cast in this election, Republican Senators are now called to apply that standard,” Obama said.

At this writing, it is too early to tell whether current President Donald J. Trump will apply pressure on Republican Senators and their Senate Leader Mitch McConnel in pushing through a speedy response to Ginsburg’s demise before the November 3rd, 2020 election. There is a possibility, judging from the recent political rhetoric that may be the case, however, this development will surely make the election atmosphere during the next few weeks even more volatile than has occurred in this highly charged partisan election year to date.

Read Other Stories: What they’re are writing about the death of RUTH BADER GINSBURG at our sister website featuring TheTopNews.Net gathered by USWebDaily.com, established in 2005.