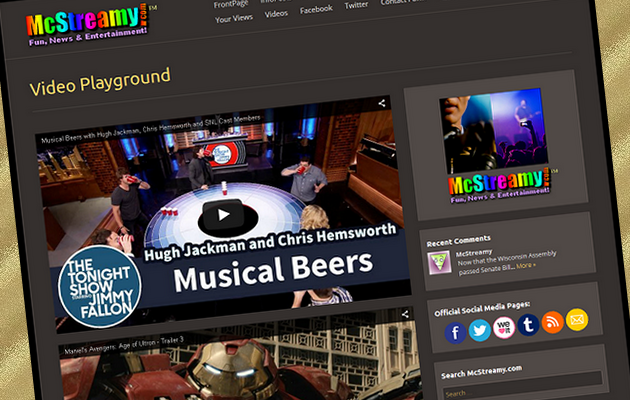 McSTREAMY.COM (03/06/2015) – Video Playground is the new feature at McStreamy.com. We’re starting out with four videos we have found unique enough to include in the first batch of videos we’ve selected for your viewing pleasure. From time to time, we’ll be adding additional entertaining or informative videos that we think you might like.

2. A motion picture trailer about the movie called Marvel’s Avengers: The Age of Ultron.

3. A Night of Too Many Stars skit from Comedy Central, starring Bob Barker and Adam Sandler.

4. A comedy routine from a few years ago when Flip Wilson was one of the hottest names in show business. It’s his famous comedic sermon about The Church of What’s Happening Now.

5. Iggy Azalea and dancers performing “Beg For It” from the People’s Choice Awards on CBS-TV, was originally number 5. As noted in our first paragraph above, we expect to add more videos from time to time. Some of the new ones may replace some of the older Video Playground videos. Iggy Azalea’s Beg For It video has been replaced by Jimmy Kimmel. While in turn, Kimmel might at some time in the future be replaced by yet another video, etc.

We have since added several more pages and replaced all of the original entries with interesting, exciting, entertaining videos. Some of the replacements have, themselves been replaced by other videos, which, at some time down the road, may also bee replaced. In other words, the internet world is full of great videos, waiting to be shared with you by our staff at McStreamy.com. Share them we will, but our space is limited, so some of your favorites in our Video Playground, may disappear from time to time, to make way for another gem or two.

Two things you need to be aware of: (1) The quality of the video will depend on your connection speed and the ability of your device.  You might need to adjust the quality using the adjustment on the video screen. You may want to turn your mobile device on it’s side to see the video in a larger width video image screen. (2) To hear the audio portion of the video you will need either headphones plugged into the earphone jack of your device, or use internal or external speakers, or audio connections to your stereo. Remember to turn your speakers on. If your device is not equipped with speakers, outside speakers can be attached to most devices through audio out, or, headphone, jacks.

These are our first video offerings. As we mentioned at the start of this brief article in the About McStreamy category, we expect to roll out additional video titles in the future. Enjoy.

To go to our Video Playground page, click on the image at the right, “Videos” in our Main Menu at the top of any page, or CLICK HERE.