Insurgent, Domestic Riot In The Halls of U.S. Congress 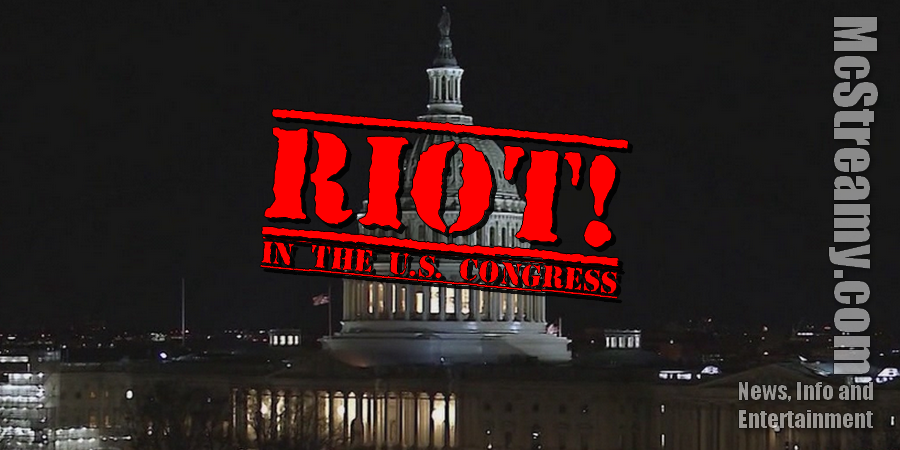 McSTREAMY – A largely angry “Make America Great Again” (MAGA) mob broke into the United States Capitol Building, causing damage, blood, and several deaths during the insurrection Wednesday, January 6, 2021, after being incited by President Trump at a rally earlier in the day near the White House in Washington D.C., USA. Trump, who lost his re-election bid in the November 3rd, 2020 Presidential Election, had been vocally insisting that he did not lose the election, but, instead charged that he had been cheated of the win by alleged maneuvering that gave the election to President-elect Joe Biden instead of naming Trump the winner of the 2020 bid for re-election.

The Trump charge was proven false numerous times, but Trump had been making the false allegations on Social Media, in television interviews, rallies, and to reporters at so-called “news conferences” often since November 3rd, and continued claiming what amounts to “the Big Lie” to the “Make America Great Again” Trump fans January 6th. The huge lie was believed by millions of his political fans, many of whom showed up at the Washington D.C. rally at the invitation of Trump on that day, now, often called A Day of Infamy in the history of the United States democracy.

At least four people died as the result of actions taken during the assault on the capitol building housing the U.S. House of Representatives and the U.S. Senate, including one female, loyal Trump voter, who was shot inside the building during the melee and later died. A U.S. Capitol Police officer also died the next day after being injured when supporters of President Donald Trump raided the Capitol building on Wednesday, bringing the total number of known fatalities resulting from the incident to five.

The sad development that day resulted in many of the members of the mob breaking into the building, which had been locked down due to the COVID-19 Pandemic precautions. Inside the Capitol, the combined House and Senate worked inside on their Constitutional duty to accept the Electoral College Vote Tallies of 320 for Biden and 232 for Trump (which were based on the results of the popular vote by more than 155 Million nationwide voters (81 Million for Joe Biden and 74.1 Million for Trump).

When President Trump spoke in inciteful terms, he encouraged the gathered MAGA Rally mob to march to the Capitol Building, where he knew Congress was performing its Constitutional Duty in the culmination of the election process. He continued to verbally deliver his repeated, misleading rhetoric to his loyal followers, giving the MAGA group continued false hope at the January 6th rally.

President Trump told the large rally crowd present to march to the Capitol building and show Congress that the Senate and House members should not be a party to the so-called “Steal” of the election from him which he had erroneously convinced his supporters had taken place. Unfortunately, too many of the MAGA crowd continued to believe his lies about the election result and took his direction to be “strong” while putting pressure on Senators and Congressional Representatives to heart.

When the marchers arrived at the Capitol building, the more aggressive members of the MAGA group climbed the outside walls, broke windows to get into the locked building, and climbed inside where they violently roamed the halls, vandalizing and stealing momentos, while breaking into individual offices and the House and Senate main chambers. Fortunately, during the confusion, the House and Senate members were able to make their way to secluded secure locations and were able to avoid direct confrontation with the angry mob.

After authorities cleared the building several hours later, the House and Senate reconvened and finished the agenda item for that day, during which Congress asserted that President-elect Joe Biden and Vice President Kamala Harris were legally elected and will be sworn in as our next President and Vice President in a ceremony on January 20, 2021, per requirements in the United States Constitution.

The certified results of all 50 states show that Biden received 51.33 percent of the popular vote nationwide to only 46.96 percent for Trump. That fact translated into Biden winning the necessary Electoral Votes while Trump came out the loser of the 2020 Presidential Election.

Donald J. Trump has been attributed with inciting insurrection by his followers due to his continued lying to the American people, misrepresenting that his so-called election was stolen by a plot to take his win away and instead give it to Democrat Joe Biden through alleged unscrupulous means, and, further, by his encouragement at the January Washington D.C. rally, which added fuel to the fire inside his followers by encouraging the MAGA Rally mob to go to the Capitol Building and show their anger and resentment on behalf of their beloved President.

As a result, many Democrats, and Republican officeholders, as well as dozens of former cabinet members and military leaders, and others are calling for President Trump’s resignation or, if not voluntary resignation, activation of the provisions of the 25th amendment (which would involuntarily force him out of office and make Vice President Mike Pence temporary President until the new, legally elected president is sworn in on January 20th).

If either of the latter two events does not take place, House Speaker Nancy Pelosi has said the Democratic Majority House Caucus is seriously looking at the possibility of another Impeachment of President Trump on the new charges resulting from his part in the events which resulted in the forceful activities, damage, confrontation, injuries and loss of life at the Capitol Building by the MAGA mob on the now infamous, January 6, 2021.

READ WHAT THEY’RE WRITING ELSEWHERE at other quality news reporting websites. Go to see the listing of articles at other websites included in our databank at our sister website: Insurgent Riot In U.S. Congress.