The 2020 Election Will Determine the USA’s Future! 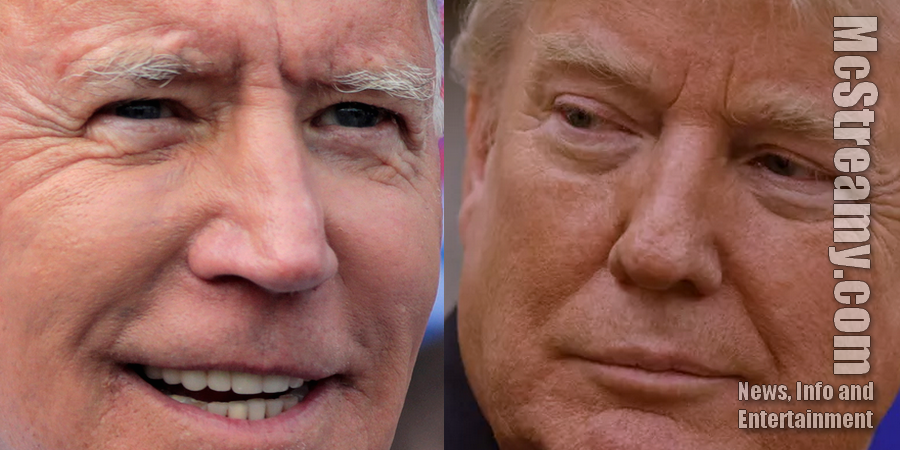 McStreamy News – It’s General Election Week 2020  in the USA, the week democracy reigns supreme, as American citizens who are serious about living in the greatest form of self-government, actually participate, by voting for the people who represent them in the federal government. The political contests include, at the top, the President of the United States, followed by United States Senators from each of the 50 states and congressional candidates to sit in the House of Representatives.

The top positions find current president Republican Donald J. Trump (pic-right) attempting to be elected to a second four-year term. He is being challenged by Democrat Joe Biden (pic-left), who was vice president for eight years in the Barack Obama administration and before that a U.S. Senator for several years. The voting will close on the evening of November 3, 2020, after which ballots will be tallied and winners and losers will soon, hopefully, know which category they fall in.

Due to complications this year, although it is hoped winners and losers will be known as rapidly as in the past, it is not guaranteed that will occur. Without going into the highly controversial details, anybody who has been following the daily news leading up to this week knows what we are talking about. At any rate, it is hoped by a major portion of Democrats, joined by many prominent Republicans who have spoken out against Trump as their president, have pledged in huge numbers to defeat the incumbent in this election by voting for Joe Biden and his vice presidential running mate, California United States Senator Kamala Harris, a former San Fransico District Attorney, and California Attorney General.

Early Voting and Absentee Ballots sent in during the last couple of weeks indicates there may be a larger total vote tabulation during this 2020 election than there was in 2016 when Trump earned enough Electoral Votes to squeak into the White House, even though his then-opponent, Democrat Hillary Clinton, actually earned about three million more popular votes. Even though many polls indicate Biden is favored to win, there still could be an upset, as there was in 2016, when Hillary Clinton was favored to win.

Republicans, Democrats, and Independents are holding their breaths to find out whether there will be a turn over that will see the White House, Senate, and House of Representatives changing hands, giving Democrats a turn at serving citizens of the United States in a modern, progressive way, rather than the Republican’s conservative, suppressive attitudes which favor big business, rather than the workers and middle class who provide the labor to build and maintain a successful balance to the makeup of the country.

AS OF NOV. FIRST, the 2020 General Election received a Total Early Vote of 93,297,208 so far, according to The United States Election Project. Breaking down the total, there were 34,045,137 In-Person Votes Cast, plus  59,252,071 Mail Ballots Returned. Figures indicate there were 31,958,869 Mail Ballots which had yet to be received at that point. In other words, as of the latest tabulation available from the United States Election Project, at that time, the known Total Early Vote amounted to about 68 percent of the Total Votes Counted in the 2016 general election.

The Early 2020 Vote could mean there will be a record turnout, however, Campaign Advisors point out this is no reason to not vote, as some people did in 2016, because they thought, based on polls, their vote was not needed, so why bother. The person who erroneously thinks their vote won’t count is exactly why you should vote because your vote may be the vote that could be the difference that puts your favorite candidate over the top. So, if you haven’t voted yet, get that vote in before the deadline.

Important: If you’re holding an Absentee Mail-In Ballot, do not place it in the mail, because it is now too late. At this late date, the United States Postal Service will not guarantee it will arrive at its intended address by the voting deadline. Vote in Person or deposit your Mail-In Ballot in person. Make Your Vote Count by finishing the process properly.

FOR MORE STORIES that are being written on other websites and news sources, try our sister website, TheTopNews.Net from USWebDaily: What They’re Writing about The 2020 Election.