Site Tells Truth About Trump Promises Made and Broken 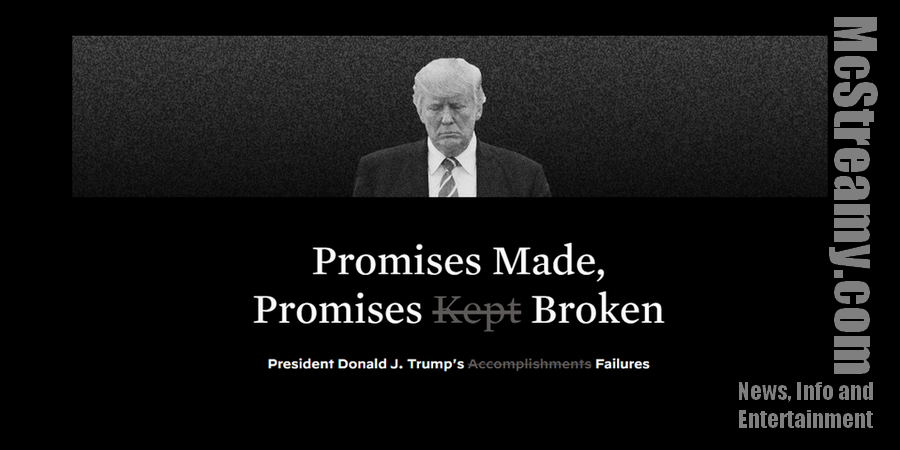 McStreamy.com – The Biden-Harris presidential campaign has a website online that tells the truth about the past four years of the Donald J. Trump actions and/or non-actions on behalf of the citizens of the United States while Trump was occupying the Oval Office in the White House at 1600 Pennsylvania Avenue NW, Washington D.C. The info on the site lays out what the Trump Campaign claims are the Promises Trump has made and kept, compared to the view of presidential candidate Joe Biden and Vice Presidential candidate Kamala Harris.

The Biden-Harris website is “KeepAmericaGreat.com”. It points out in detail just why the speakers of the COVID-19 Pandemic version of the 2020 Republican Convention have been trying to push a false narrative in attempting to make Trump’s record seem something more than what it is.

The explanations on the site indicate Trump’s reign has actually resulted in a series of disastrous decisions and policies that show he has been a failure in keeping his promises and instead is a record of Promises Broken. It would seem when reading through all 12 Issues, one could only decide, logically, to truly KeepAmericaGreat, it would be foolhardy to give Trump another four years of misuse and abuse of the office he now holds, and instead vote for the Democrat’s Biden-Harris ticket in the November 2020 election.

To read all about the truth of Trump’s accomplishments or failures go to the website with all of the true information regarding promises and whether they have been kept or not. See it all for yourself at TRUMP’S PROMISES MADE, PROMISES BROKEN.

Find out more about the Republican National Convention on our sister website for TheTopNews. See WHAT THEY’RE WRITING ABOUT TRUMP GOP CONVENTION.