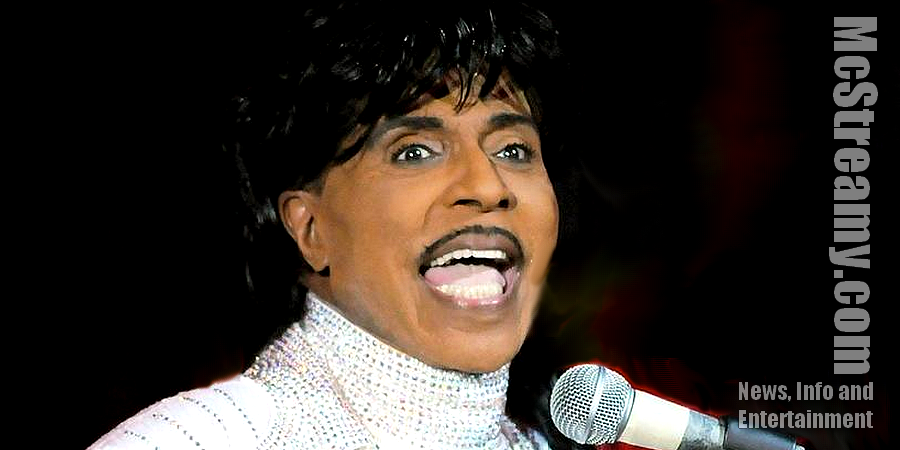 McStreamy News – Though he has passed on, his iconic songs continue, as will his influence. Rock ‘N’ Roll pioneer Little Richard, born Richard Wayne Penniman, who died May 9, 2020, at the age of 87, had what was considered R&B (Rhythm and Blues) hit after hit during the early 1950s. The music was so infectious due to the lyrics, rapid, fun beat, and frenetic performances of flamboyant Little Richard, himself, that the tunes were soon included on playlists of then-fledgling mainstream rock’n’roll stations, in addition to the black stations and programs during the strongly adhered to separatist years before the civil rights era that followed.

The acceptance of Little Richard’s persona, songwriting, and musical abilities helped create a world of change that continues to this day. His songs and personal style influenced teen dancers and musicians alike and spread the style of songwriting and musicianship to white, as well as black and brown audiences and musicians who would soon adopt R&B as an important part of what would become the monster all-inclusive genre called Rock and Roll in short order.

Little Richard’s hits including “Tutti Frutti,” “Long Tall Sally,” “Rip It Up,” “Jenny Jenny,” “Keep A-Knockin’” and “Good Golly Miss Molly” became major successes that were considered crossover hits when the mainstream stations started playing them. They became songs covered by many white stars who were trying to satisfy teen audiences, the record-buying young people who discovered rock’n’roll and claimed it as their own. Even the smooth, syrupy voice of Pat Boone and many others tried to emulate the sounds of Little Richard in their repertoires at the insistence of record companies trying to cash in on the trend.

There were many stars who copied the trend, singing and playing the popular songs and writing and recording songs modeled after the patterns in those found in the work of Little Richard and Chuck Berry and others from those early years. It all eventually became the Rock’N’Roll found on oldies stations these days, including our sister website, GreatGold.fm Internet Radio, the world-wide online home of the GreatGold Classic Rock and Pop Oldies Mix from the best of seven decades of songs from the 1950s through the 2010s, and beyond, plus a few Classic Hit Wannabees by Newbies and Indies from time to time.

Little Richard’s influences can be found in the early work of The Beatles, the Rolling Stones, and many other star recording and performing acts that owe a huge amount to the beginning of their careers and popularity that has stood the test of time. Even artists like Bob Dylan felt Little Richard’s influence. “I just heard the news about Little Richard and I’m so grieved,” Dylan wrote. “He was my shining star and guiding light back when I was only a little boy. His was the original spirit that moved me to do everything I would do.”

Little Richard was inducted into the Rock and Roll Hall of Fame as part of its first group of inductees in 1986, and he is in the Songwriters Hall of Fame. He was the recipient of a Lifetime Achievement Award from the Recording Academy and a Lifetime Achievement Award from the Rhythm and Blues Foundation. Other honors include the song “Tutti Frutti” being chosen to be in the National Recording Registry of the Library of Congress in 2010, noting that his “unique vocalizing over the irresistible beat announced a new era in music”.