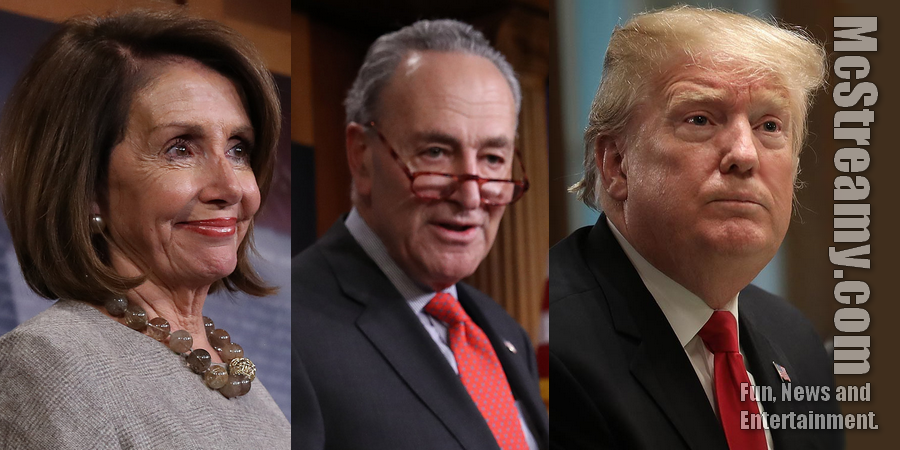 McSTREAMY.COM – President Donald J. Trump [pic-right] announced Friday, January 25, 2019 that the 35 day partial government shutdown would come to an end, temporarily. About 800,000 federal employees have not received a paycheck during the shutdown, while the president held out for taxpayer money to fund a southern border wall he had promised Mexico would pay for, during the 2016 election campaign.

The temporary re-opening of government offices affected, will allow checks to be funded and written to approximately 400,000 federal employees forced to work at various agencies and departments during the 35 day shutdown for no pay. It is not known at this writing how the temporary “open” period until February 15, 2019 will affect an additional 400,000 federal employees who were furloughed during the “shutdown”.

During the agreement with Democrats to temporarily re-open the government (until February 15, 2019) it is expected that, separately, congressional Democrats, headed by House Speaker Nancy  Pelosi [pic-left], Senator Chuck Schumer [pic-center], Senate Republicans headed by Sen. McConnell, and the White House,  will negotiate a plan for border security that Trump can accept.

President Trump says he is confident the final, separate deal, will  include funding for a wall or barrier along the border, but warns if it doesn’t he may not sign it and the shutdown would resume, or, he may opt to issue “emergency” presidential actions.

For more about the Shutdown see our sister website at USWebDaily.com, the home of TheTopNews Happening Now since 2005. – McStreamy NewsBriefs