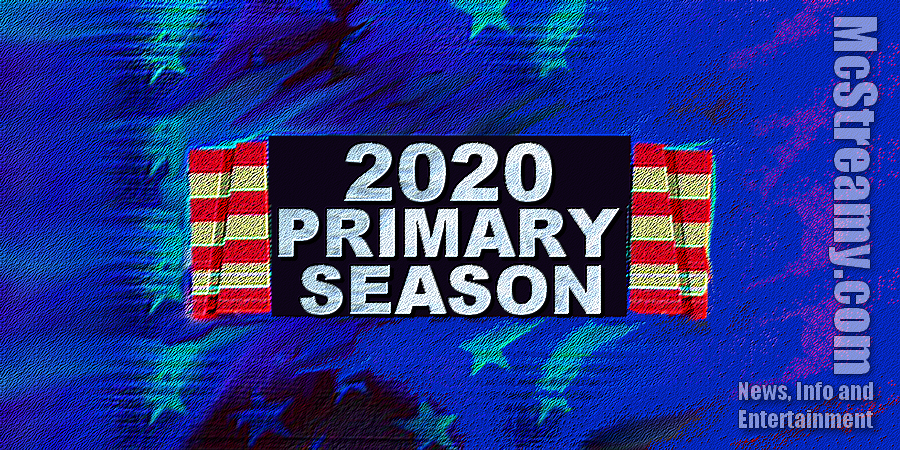 McStreamy.com – The Primary Season switches into high gear with this Saturday’s South Carolina Democratic Presidential Preference Primary followed by next week’s Super Tuesday, March 3rd when primaries will be held in 15 states all on the same day. The long list of Democrats seeking the Democrat national candidacy on the November 2020 ballot has been getting smaller and smaller as candidates have dropped off for lack of support and funds. Those remaining in the running, at this writing, include Joseph Biden, Pete Buttigieg, Amy Klobuchar, Bernie Sanders, Tom Steyer, Elizabeth Warren, and Tulsi Gabbard. South Carolina has 54 delegates up for grabs.

New York Mayor Mike Bloomberg, who got into the race late, will not be on the South Carolina ballot, saving himself for Super Tuesday ballots when a total of 1344 delegates will be pledged depending on the results of primaries in 14 states and American Samoa. However, the South Carolina Voting Commission indicates there will be some names on the SC ballot who are no longer running (Michael Bennet, Cory Booker, John Delaney, Deval Patrick, Andrew Yang) due to not being removed before the printing cutoff date. So voters in South Carolina will have to be careful not to waste their votes on candidates who have dropped out of the race but are still on the ballots before them.

More delegates to the presidential nominating conventions can be won on Super Tuesday than on any other single day. Super Tuesday primaries and caucuses occur in many states and typically represent a presidential candidate’s first test of national electability. Candidates must do well on this day to help secure their party’s nomination. Convincing wins in Super Tuesday primaries have usually propelled candidates to their party’s nomination. States participating in 2020 Super Tuesday are Alabama, Arkansas, California, Colorado, Maine, Massachusetts, Minnesota, North Carolina, Oklahoma, Tennessee, Texas, Utah, Vermont, and Virginia, plus American Samoa, a U.S. territory in the South Pacific Ocean. –McStreamy NewsBriefs