Rock And Roll Heaven Music Heard Everyday On The ‘Net 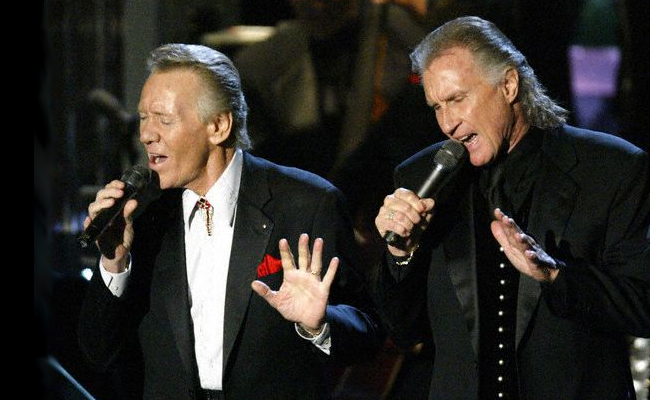 McSTREAMY.COM (08/11/2015) – One of the most distinctive voices in rock and roll history was born August 10, 1940. Bobby Hatfield, was the man who contributed as much to the sound of The Righteous Brothers as did his singing partner Bill Medley. They were both uniquely talented individuals, but when Hatield’s high, soaring voice joined Medley’s outstanding, gravely, soulful voice, they became a force to be reckoned with. Their sound could not be matched during a time when the so-called English Invasion took over radio broadcasting playlists, and the hearts and minds of buying teenagers.

Hatield died in  2003, but The Righteous Brothers music lives on the internet at GreatGold.fm Internet Oldies Radio for listeners throughout the world to enjoy. Their best songs are a constant reminder of the unique and prominent role The Righteous Brothers carved out in Rock and Roll History. Hatield is seen at the left above, next to Medley (born September 19, 1940), performing together during their later years. During the month of August, as well as September, the Righteous Brothers can be heard often in the Birthday Month Extra Plays, traditionally a part of what listeners hear in the GreatGold stream.

Some of the above named individuals have also passed on to the “Rock and Roll Heaven” the Righteous Brothers sang about. They too, have joined Bobby Hatfield, singing and playing in that place designated for singers and musicians after they leave this Earth. The wonderful part about the natural course of living is that, even though we have lost some of the people who have composed, performed and recorded songs that have meant so much to listeners like you and me over the years, we can still enjoy their efforts everyday in the music heard on the internet at places like GreatGold.fm Internet Oldies Radio.

GreatGold.fm recently renovated the inner workings of their website, making it Mobile Ready and Mobile Friendly. The renovation does not include any change in the music listeners hear. Even though they are regularly adding songs to their playlist, the type of music they play, and the forumula of their mix, has not been altered. In addition, there are no major changes to the look and feel of the website. The big news concerning the unveiling of the new GreatGold website, released online August 3, 2015, is that visitors can experience all of the site, fully, in any size mobile device, big or small.

The content automatically adjusts to the size of your screen. You can even listen to the music directly from the website in most phones, using nearly every browser. If you want to see for yourself what we’re talking about, the GreatGold.fm website can be found on the internet at http://www.greatgold.fm.