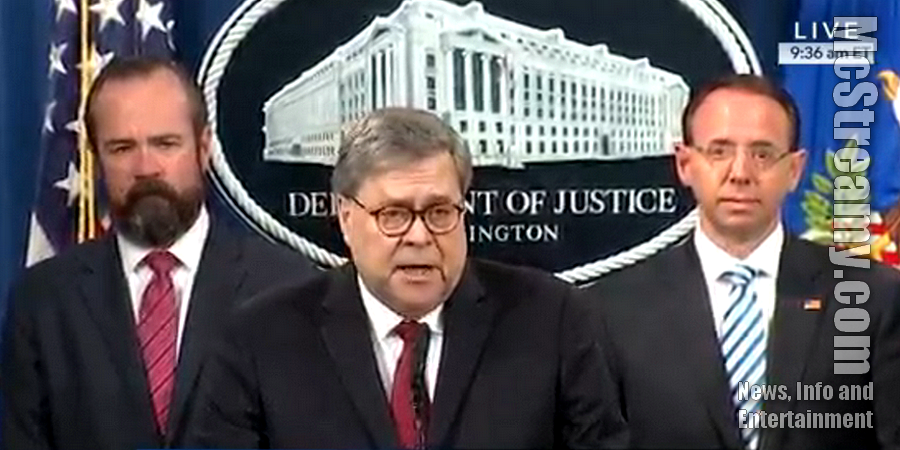 McStreamy.com – U.S. Attorney General William Barr announced the release of the redacted version of the long awaited Mueller Report today at a brief news conference, April, 18, 2019. In his prepared statement, Barr indicated the report could not establish a legal conspiracy between the Russian government and the Donald J. Trump 2016 campaign for President of the United States. Barr also reiterated that the report could not find evidence of legal obstruction of the Mueller probe by President Trump.

Many Television news reporters, analysts and commentators, and some print reporters, are disagreeing with many of the contentions contained in the Attorney General’s statement introducing the release of the redacted Mueller Report. For the most part, their initial study of the multiple pages of the actual redacted version of the report, show there are numerous parts of the details in the report that seem to cause one to reach different conclusions, indicating Barr may have parsed his introduction comments in favor of the President .

Congress may become the next chapter in the scandal of whether there was Collusion or No Collusion, and Obstruction or No Obstruction. The hearings on the matters likely will continue in order to reach a conclusion that satisfies House of Representative and Senate members in their role of protecting the Constitution of the United States.

Many elected Representatives and Senators disagree with Barr’s introductory comments. They feel, after studying the pages of the redacted Mueller Report it begs for and deserves more Congressional attention on behalf of the American public.

House Judiciary Committee Chairman Jerrold Nadler points to Mueller’s statement that investigators were unable to clear the president of obstruction of justice: “The evidence we obtained about the President’s actions and intent presents difficult issues that prevent us from conclusively determining that no criminal conduct occurred,” the report states. Nadler says, “This is exactly why we need to hear directly from Special Counsel Mueller and receive the full, unredacted report with the underlying evidence.” – McStreamy NewsBriefs

To find out more information, see USWebDaily, our sister website, for TheTopNews stories being written and reported by reputable news operations on the Internet.

Read complete copies of the Redacted Mueller Report Here. Please be aware, because of the lengthy number of pages involved, downloading the report may take a long time and a large  amount of bandwidth to transfer to your computer or smartphone device.