Barr: Mueller Did Not Find Conspiracy or Obstruction 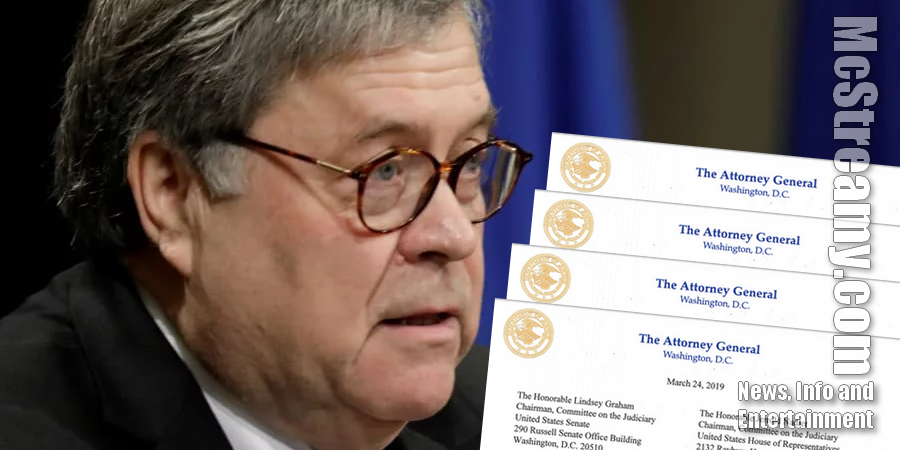 McStreamy.com – United States Attorney General William Barr [pic] informed key members of Congress in a four page letter today (03-24-2019) that the 22 month Investigation by the Mueller Special Counsel team did find Russian interference in the 2016 election, but did not find indisputable evidence of conspiracy with Russia by any members of the 2016 Trump Campaign team to do so.

The Special Counsel’s investigation determined two main Russian efforts influenced the 2016 election. The first involved a Russian organization called Internet Research Agency, which conducted disinformation and social media operations designed to sow social discord with aim of interfering with the election. Mueller also found, Russian government actors hacked into Hillary Clinton Campaign and Democratic Party emails and made them available to the public on the Internet through WikiLeaks.

As for news reports of possible obstruction by President Trump during his first nearly two years in office, “the government would need to prove beyond a reasonable doubt that a person, acting with corrupt intent, engaged in obstructive conduct.” Barr indicates the Mueller Report findings do not conclusively prove that contentious issue.

Barr states in his letter, “the report sets out evidence on both sides of the question and leaves unresolved what the Special Counsel views as ‘difficult issues’ of law and fact concerning whether the President’s actions and intent could be viewed as obstruction.” Barr explained that the Special Counsel states in the Mueller Report, regarding obstruction, “while this report does not conclude that the President committed a crime, it also does not exonerate him.”

House Judiciary Committee Chair Jerry Nadler (D) says, “Special Counsel Mueller clearly and explicitly is not exonerating the President, and we must hear from AG Barr about his decision making and see all the underlying evidence for the American people to know all the facts.”

“There must be full transparency in what Special Counsel Mueller uncovered to not exonerate the President from wrongdoing. DOJ owes the public more than just a brief synopsis and decision not to go any further in their work,” according to Chairman Nadler.

Representative Nadler says, “In light of the very concerning discrepancies and final decision making at the Justice Department following the Special Counsel report, where Mueller did not exonerate the President, we will be calling Attorney General Barr in to testify before the House Judiciary Committee in the near future.” – McStreamy NewsBriefs